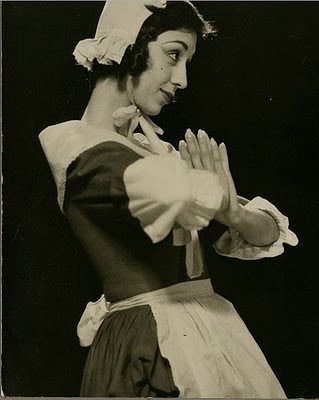 With this episode we finally enter day two of A Town Called Disdain, the sprawling masterwork of the legendary filmmaker, raconteur, bon vivant and sadly underrated novelist, Larry Winchester. Except it turns out that it’s really day three.

(Go here for our previous episode, or click here to return to the beginning.)


In this weird white room again, and having sex with this girl with all these people watching, this thin slight girl, not even his type really but he couldn’t help himself, and it was good, damn good, but so embarrassing with all these people watching, and then a pretty Mexican girl in a maid’s uniform was there with a tray and a slightly tarnished old coffee service.

Dick sat up. He had a hard-on, and he pulled his legs up under the covers to disguise it.

Daphne was still sound asleep, curled up on her side.

“Eight o’clock, sir. Mr. Johnstone want to know if you want to have some coffee to wake up and then come down for breakfast.”

“One night, one day, and another night.”

“Wow.” Dick took the coffee pot and poured himself a cup while she held the tray. “Did -- anyone try to wake us up?”

“No. Mr. Johnstone stay in bed all day yesterday too. He had --”

Holding the tray with the flat of her left hand she put her right hand to the side of her sleek lovely head and rocked it back and forth.

He sipped his black coffee, then turned and put his hand on Daphne’s bare shoulder.

She pushed his hand away.

So the maid (whom Dick found out was named Esmeralda) brought them toast and homemade rutabaga preserves and more coffee (with some hot fresh milk for Daphne) and while Daphne went back to sleep Dick went down to the bathroom in his old kimono.

He had a very enjoyable and lengthy voiding of his bowels, and then an equally enjoyable and even longer bath, using the lavender Yardley soap they’d taken with them on their precipitous departure from the Palm Grove in Singapore, and smoking the last of his Craven A's, reaching over and tapping the ash into the toilet while he read a dozen or so pages of Slaughterhouse-Five.

Finally he got out, plugged in his Remington and had a nice shave, splashing on some Lentheric after-shave (gotten from the shop at the Palm Grove, and put on their never-paid bill), and then he brushed his teeth.

He looked at his handsome face in the mirror. Once again he had survived his own self-depredations and come out of it somehow fresh as a daisy.

As he walked back down the corridor he saw a door close, and he thought he caught a glimpse of a strange dark eye.

He managed to haul Daphne out of the bed, and she went to the bathroom in her turn, toting her own toiletries, including a bottle of Guerlain bath salts (more swag from the palm Grove).

After a half hour or so Dick put down his book and went down to the bathroom again to see if she hadn’t drowned. He woke her up and added some hot water. He lit her a cigarette in her holder, then he washed her with her big soft sponge, and he shampooed her hair.

By the time they got back to their room they were both longing for each other, and she pulled Dick down onto the big brass bed.

In a closet of an adjoining room Hope stood on a shoeshine box and peeked through a crack in the wood, holding her hand over her mouth.

Out in the corridor, having heard the old bedsprings singing and whining, Esmeralda stopped by the door and crouched down, peering through the keyhole.

Dick and Daphne dozed for a while, and then Daphne said, “I am absolutely famished.”

As luck would have it, it was now lunchtime at the Johnstone Ranch.

a tale of wonders, part 3 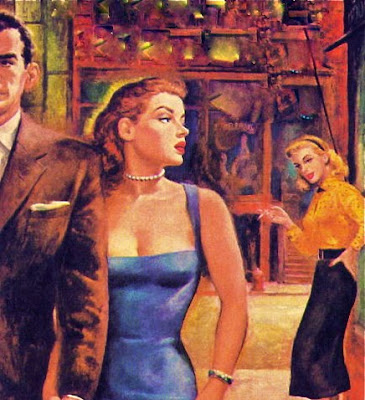 Let us return to the Johnstone Ranch (just a short drive from a town called Disdain) and to the mysterious and lovely Daphne Ridpath (AKA "Smith")...
(Go here to see our previous episode, or click here to return to the beginning of this first-ever uncut and unexpurgated edition of Larry Winchester's long-out-of print cult classic. "I'm so glad this new edition is being made available. My Scotch-taped-up old Gold Medal paperback has sure seen better days!" -- Cormac McCarthy)

(Continued here, and until someone stops us.)
Posted by Dan Leo at 11:38 AM 2 comments:

words by genghis , pictures by rhoda 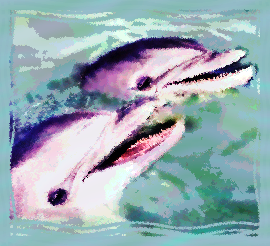 Our last week here Emma’s not teaching yoga. So we swim, make love, and swim. Charlie hangs at the yoga pavilion but comes here to cook dinner. Emma’s grateful, I guess, because otherwise she’d cook. I, however, have to ask why he’s doing it.

“Because I want to, Scott. And if that’s not good enough, let’s say I need the practice.”

“Practice for what, Charlie? You’re not opening a restaurant.”

(click here to read the first episode and here  for the previous one)
“No, I’m not—” Charlie tips his head back, sniffing hard, “—opening a restaurant, Scott. I like cooking for my family.”

“What family is that?”

“All right then. My friends, you and Emma.”

He registers a rise in my continual exasperation, and asks, “What’s so terrible?”

Tonight Charlie’s cooking something special. Emma hints there’s a reason but won’t give me a clue even when we’re walking back from the waterfall and are almost home.

She’s wearing her black bikini and playing tag with the waves—leaving me alone awhile.

Ever since Charlie arrived this year, he annoys the shit out of me, and I can’t figure out why. He’s the same as always: a living, breathing party with keen intuition.

That day the policeman stopped by, Charlie was doling out the goods to anyone who felt like getting happy. That’s why those girls stripped on the beach in the first place. What pissed me off wasn’t the stupid B-12 injections; that’s Logan’s thing. But Charlie sitting down with the cop and telling him jokes in Spanglish that he learned from my dad’s housekeeper. It still bothers me, which is just insane.

Buddying up to the cop was smart. Necessary, really if Kitty wants to stay in business. And—Charlie was really funny with his Chicago Spanglish. He had the cop laughing and slapping the counter. Soon he’s trying to correct Charlie’s pronunciation. “¿Cómo está?” the policeman demonstrates. Charlie flattens it out like a south-side Chicagoan saying, “Come on Esta.” A little more lemonade and more laughs and the cop’s waving, “Pure Vida,” all around. Afterwards, Kitty grabs Charlie from behind, her arms around his wide girth until he spins to face her and she kisses his head. “Leave it to you, baby.”

After allowing me time alone, Emma’s holding my hand. “What is it about him that’s bugging you?”

I stroke the nape of her neck. “We’re not brothers. Maybe I’m tired of pretending we are. It’s time to start separate families.”

In truth, Charlie’s the oldest of four brothers that I doubt he’s seen since ninth grade when he moved in with me. His overwhelmed mother, working two jobs, told him he had to quit using or leave—he was supposed to babysit, not pass on his bad habits. His dad had moved to Atlanta when Charlie’s youngest brother was three. Kinda like my mom moving to Florida.

My dad liked (if not loved) Charlie. His serious, money-fixated eyes changed and brightened when I asked if Charlie could live with us. “Nothing I’d like better, Scott. The kid makes me happy.”

“Why didn’t I know this?” Emma acts like I’ve kept this from her on purpose. “Are you jealous of him? One thing you’re always saying, Scott, like it’s part of his name is that ‘everybody loves Charlie; everybody just loves him.’”

I tug her hand. “Emma, don’t talk like that. I mean it. Because nobody loves Charlie as much as I do. Nobody.”

We walk awhile, the two of us still confused about the same thing, when she says, as if this might be the thing: “He’s never even looked at me, Scott. Nothing close.”

“I know that, Emma. I’d be surprised if Charlie has ever intentionally looked at a woman. He’ll go along, like with Kitty, if coaxed, but it’s not what he’s after.”

Emma edges away from the water, wanting to sit in the shade. Like, maybe if we talk about this all the way through, we’ll discover a solution. She inches close to me and lays a hand on my thigh. That’s okay, though. She can leave it there. But goddamn it, why’d I mention that shit about Charlie not being my real brother? I never cry, but no way in hell I’m letting this once in a million fluke happen when Emma’s with me.

“Enough ancient history.” I fling her over my shoulder and she shrieks as if it’s scary. I toss her into the water and jump on her as a wave curls over us. We ride it in, side by side and let the next one drag us out where we swim side by side, like a pair of dolphins.

(click here for the next episode)
Posted by Unknown at 10:48 AM 2 comments: