Posted by horace at 3:42 PM No comments:

Posted by horace at 3:22 AM No comments:

arthur and guinevere - 4. the desperado

Posted by horace at 2:12 AM No comments: 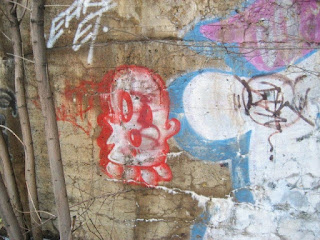 Running full out, barefoot and shirtless on hot, sticky streets, shards of broken bottles flashing yellow in sodium light. The crickets go quiet when we rush past, two ghosts on a rippling breeze. And then - Surprise! - we catch up. Out comes the mace as one goes arse over teakettle to test the cement, another, cut off at the knees. Payback is a bitch.

Walking home again, we ditch the weapons just as the police arrive. Two squad cars confront us, another closes in our flank. We'd just committed a felony assault, nor does the law allow that two wrongs make a right. I make certain to contain a smile when two familiar faces appear from behind the semaphores blinding light.
For once it's enjoyable talking to the cops. As a rule one should never talk to police. They like us, too - you can tell by the ribbing they give us - for being shoe-less, in just our skivvies, for that matter. But that's how fast things happen in this neighborhood.
One officer cracks that training barefoot has its drawbacks, and admittedly, I don't know, but, in hindsight acknowledge my uncertainty about the glass. The proper response - we'd left in a hurry, like it happens every day, or night in this case - just act like it's nothing at all.
There's a point we share consensus with. Each of us knows "the law" doesn't always arrive in time. And, we are of the Old School. A fact of which many of the blatantly disrespectful newcomers are unaware of. The frequency in which they appear has grown exponentially relative to the general decline of our city, a fact we no longer bother to associate with connotations of outrage.
The adrenaline rush isn't the same either; more a tacit reminder of our existence here and a determined acceptance of duty to a square block or two of this river town we might claim our own. We are, after all, earlier products of its time and standing through the repetition of history.
As we linger, our last few moments together spent comfortably in idle chatter with the waning crescent grinning above, an eery calm descends upon us all.
`
sparrows scatter
through stands of bamboo -
that brand new tattoo
`

arthur and guinevere - 3. the communist

Posted by horace at 3:06 AM No comments:

arthur and guinevere -- 2. the beatnik

Posted by horace at 6:40 AM No comments:

arthur and guinevere - 1. the assassin

part one of four