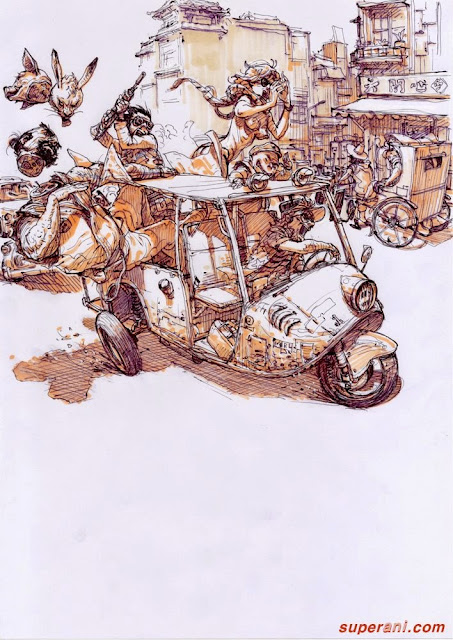 Kim Jung gi
Billy ripped the page from Phoebe's notebook, let’s face it, he thought, nobody’s ever gonna know; it’s not like anyone gives a shit anyway. The thumb-start on his faux-retro maglev Hyundai Sinner worked eventually; whacking crackle into the alleyway like some zombie bad lung trauma, and he cranked it into the high street as if he hadn’t already used up eight of his nine lives. The bipolar traffic honked resentment at his door-handle-testicle-tangling progress through the unsynchronised mind-fuck that posed itself as progress (a political viewpoint that proclaims anyone arguing with its singular premise can go fuck themselves with their left-wing anarcho-socialist values). Billy ripped the last of his credit from the slipstream of the late-running 5:37 from Hell as it side-swiped its comatose commuter cargo into a sad resemblance of awareness, hoping that the sling-shot momentum thus gained would serve to deliver the message Phoebe’d so recently, and so desperately, scrawled upon the feint of her jealously guarded, preciously teetering-on–the-brink-of-extinction, notebook.
Tales for the attention-span deficit reader
Posted by Garth at 2:45 AM No comments: