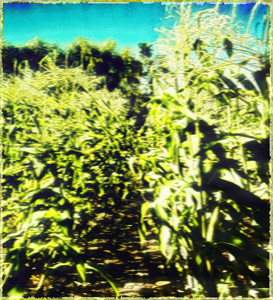 Before returning to New York, Zach called his daughter Rosalind. Because she’d be delighted to learn the twins had arrived healthy and eager to meet her.

For once, she answered his call. What she said, however, was not encouraging. “Two words, Dad: Fuck you.”


He called again and apologized to voice mail. Without forethought, he said that baby Alice reminded him of her. (She hadn’t until he said so, but…) Rosalind, too, once had looked at him with newborn triumph. At this she picked up, “Alice and Corrine—I’ve got that. Want me to tell Mom?”

All right, he deserved that. Further, because of the stalemate with Beth, he had opted to skip his son’s high school graduation. He hadn’t thought until now that he really ought to send him congratulations and a generous gift certificate.

That evening, he scrolled through his email and found that last week Matt had reported he needed a year off from school. He realized his father would object but Reed College had already approved his deferment. What Matt wanted to know was—would Zach still pay his tuition when the time came?

Against his innate sense of order and rigor, Zach answered an exhausted, “Yes,” adding a P.S. wondering if they could get together, not this next weekend, but the one after.

Before bed, he listed interview questions to review during his flight tomorrow. Unlike Dorothy Zimmerman, Zach didn’t presume his dealings with East Coast bigwigs would impress Midwest academics. Having grown up in Illinois, he thought it more likely they would suspect him of a fawning snobbery.

At nine a.m., he settled into his business class seat, only to be joined by an eight-year-old girl traveling from New Jersey, where she lived with her mother, to Omaha where her father, a lawyer, lived with his new wife, also a lawyer. It was her first time flying, and she trembled, blinking back tears.  Zach told her that he traveled on airplanes every week. Statistically, it was safer than riding in a car. She nodded anxiously. Her mother had said the same thing.

He nodded and returned to his laptop yet the child stared at him intently. So he glanced at her, raising an eyebrow.

“Now you’re supposed to tell me your name.”

“Is that your name?”

She grinned. “Then of course, Zach. That’s what I’ll call you.”

A small exchange but for Zach a first—an eight-year-old girl teasing him? He realized the past year had hurled him into a no-man’s-land of rocky ground. But only now did it penetrate that by adapting to the terrain, his authoritative manner had ceased to intimidate.  Never had children questioned him outright—not even Rosalind. Not even when he was a child himself!

Taking stock, as he did ritually, Zach perceived no dwindling of his righteous determination. Yet perhaps his harshest self-scrutiny involved deception. And perhaps all those years of running around with Vida had softened him. In order to befriend people in power, he had made a habit of holding in abeyance his innate scorn of banality. No wonder Dorothy Zimmerman hadn’t shied from prodding him to resign. But then he had welcomed the change. Or no, feeling little Emma’s persistent attention, Zach recalled that at first Dorothy’s announcement infuriated him. Then Duncan had declared it a promotion. As if wispy Duncan were the man to blaze Zach’s trail! Sitting straighter, he brushed off any possibility that his ramrod command had weakened.

“Don’t you have a video game to play? A book or something?”

“I’ll get you a headset if you want to watch TV or listen to music.” He shivered seeing her serious little face.

“Zach, are you afraid to die?”

The question, put so directly by a little girl, startled him enough so that he forgot the protocol for indignation and didn’t even bristle. Although, had someone like Duncan asked, he would never have deigned to answer.

“Afraid of death? I don’t think so, Emma. Each of us dies when it’s his turn.” Two hours later the plane hit the runway and bucked. A sickening grinding and scraping accompanied several hard collisions with the ground. The full-capacity load of passengers froze, silent and terrified. From the window, Zach watched sparks flying from the ground. The jet bounced and scraped as heads collided with the ceiling despite seat-belts.

When the jet rose steeply into the air, people breathed louder, somewhat relieved. The pilot announced a problem with deceleration—the plane’s landing gear was functioning abnormally. The pilot would circle at lower than usual altitude for twenty minutes while the ground crew prepared for an emergency landing.

During this interval, passengers mumbled desperately.  Prayers of, “Oh God, please,” and occasional moans. Emma had been squeezing Zach’s fingers since the first hit on the runway. To his surprise, he was stroking her hair protectively.

Re-approaching the runway, the plane plowed through a wall of foam but bounced higher and harder. Bodies slammed forward and back as luggage flew from the overhead bins. Emma’s eyes were squeezed shut and Zach noticed tooth-marks on her lower lip.

The plane veered off the runway into a corn field, smashing into the crop at hundreds of miles per hour. The foam barrier had dampened the sparks. Slowly but surely the corn stalks and tilled rows of earth reduced their momentum, but as they crashed through acres of mounded dirt and half-grown corn, the floor beneath Zach and Emma ripped apart. They saw flattened green stalks and billows of smoke.

Over the grinding metal, sirens sounded. Out the window, Zach saw trucks towing a black rubber sheet, racing ahead of the plane’s trajectory. He whispered, “Brace yourself,” to Emma as they suffered a shocking impact. The rubber sheared off the plane’s wings whereupon it angled acutely forward but—stopped. As Zach unfastened his and Emma’s seat-belts and lifted her toward the exit chute, she wrapped her arms around his neck and said, “Not our turn to die!”

(click here for the next episode)
Posted by Unknown at 12:34 PM

Whew! Brilliant and scary writing those last few paragraphs. So, will the brush with death change our man, or will he be like most people and continue on his merry own way? We'll see...

This combined with the other changes are affecting his thinking. But it may already be too late.