by kathleen maher
the first episode in a serial 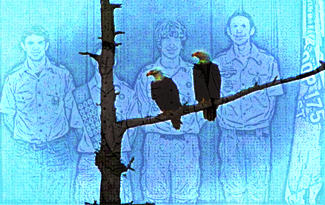 Trail Markers
A furious up-rush had driven Zachary since adolescence. He craved every advantage, trophy, scholarship, and fellowships a man could attain. The youngest Boy Scout in his region to attain Eagle, at age 13: That he considered the trailhead from which he would ascend to ever greater honors. He lived by the Scout Law, Scout Oath, Motto and Slogan, all of which he knew by heart, should anyone want to hear them.

He had graduated from high school a year ahead of his classmates and attended the University of Illinois in Champaign. He paused only long enough to marry Beth Lawrence, a Presbyterian minister’s daughter from Wisconsin, before earning his doctorate in public policy. With his eye on the Younger Institute in Washington, D.C., he attended every policy forum and conference around the country, even the minor ones.

Blond and strongly built, he possessed a commanding voice and military bearing. With vigilance and discipline, he taught himself to regulate his extraordinary energies so that they worked like a magnetic field, coloring the air around him. After years of monitoring how others responded to him, he perfected a trademark style. Seeing anyone he deemed important, Zach would march up, shake hands, and lavish direct praise. Thanks to hours practicing this approach in front of a mirror, he managed never to appear calculating or sycophantic. His over-the-top compliments suggested only a straightforward style and a discerning mind.

Still, his trek was long. No amount of inspired boot-licking could propel him to the summit quickly enough. Year by year he had to blaze his own path.  He found opportunities to write for the Institute’s newsletter. He promoted events for the website and contributed research to white papers that carried the bylines of Younger’s Senior Research Fellows.

Zach Severins endured three years teaching political science in Champaign before a tenure-track position arose in Public Policy at Columbia University—which was closely connected with the Younger Institute. The department director and the provost had conducted telephone interviews with him before extending an invitation to meet formally.

The night before Zach’s interview, really several interviews over two days, Beth put the children to bed while he rehearsed in his basement office. Beth read to two-year-old Rosalind first, kissed her good night, and turned out the light. She then read a chapter of “James and the Giant Peach” to five-year-old Matthew, only to find Rosalind whimpering outside the door because she wanted to hear both stories. Beth rarely finished the children’s nighttime rituals before nine. Afterwards, she insisted she and Zach share a few hours together.

He always protested—no time—but Beth held her own. If he wanted a family (and while neither came out and said this, an attractive, artistic wife and two healthy young children on his resume broadcasted stability), Beth expected him to share his last waking hours with her and no one else. Marriages didn’t work any other way.

Zach found no ground for disagreement. His own father, a dentist, had run off when Zach was ten. The man had made sure to attend the big events in Zach’s life, but his son would always see him as a cheater and a quitter. His once admirable father was morally weak and thus, reprehensible.

But tonight Zach and Beth could not relax, even with glasses of wine, watching television in their bare feet. Zach punched one hand into an open palm, sparring with himself.

“What time’s your flight?” Beth asked.

He peered into her eyes. “Damn it, Beth, my head feels like it’s going to explode!”

“Well, yes,” Beth said. “Tomorrow is your big chance. But who on earth knows better than you how to walk the walk and talk the talk?”

Zach punched his hand even harder. “I know you’re trying to help. But you have no idea how annoying it is to hear such a stupid cliché: walk the walk; talk the talk! You don’t understand anything about this. You know about young children, cooking, and pottery.”

“Don’t be mean to me just because you’re anxious, Zach. You’ll do great.”

She touched his cheek and remained standing in front of him until he looked at her. Finally, she kissed his cheek: “Don’t stay up too late.” 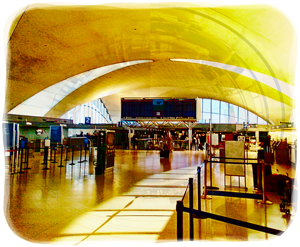 Zach woke at five a.m., a habit he had developed in high school. Getting a jump on the day mattered much more to him than sleeping. Before sunrise he had showered and dressed in clothes for the flight. His carry-on was divided: one side structured for business attire with appropriate slots for his shoes; the other side for gym clothes.
In the afternoon light filtering through beveled windows, he would not smell like someone who had driven two and a half hours to the St. Louis airport, sat stuffed in the middle seat for two hours, arrived at LaGuardia and waited for a cab. He had packed clothing for a good long run outside, whatever the weather. At four this afternoon, he would look sharp and casual when the conversation in cozy chairs turned to what he, Zachary Severins, might do teaching undergraduate political science classes at Columbia.

Before he got to the airport, however, his neck, chest, and arms itched as if covered with hives. His leg shook up and down until he tensed his muscles, planting his left foot heavily on the car floor. While he circled, looking for parking, his head grew light. These symptoms, he knew from previous incidents, meant he needed a brief, side excursion if he were to perform at optimum level.

Since he worked with such intense single-mindedness, he grew dizzy when facing occasions of freedom. In these cases, his Eagle Scout ideals, keeping him always trustworthy, always loyal, kind, cheerful, brave, and reverent, needed a short, secret respite. Not that he believed anyone, himself especially, lived above the law. These rare side-trips, like switchbacks to a hiker, were acceptable diversions from the straight path. Enough hesitation: he parked in the extended lot.

Impromptu reconnoitering was risky, but he had managed it before. He would change his ticket for the next flight to Washington, D.C. and book a next-day flight to LaGuardia, postponing the interview. Done correctly, it could work to his advantage, making him seem in demand. He handed his printout of an e-ticket to a stringy-haired woman, who was not altogether unattractive. She blushed, taking his credit card to change his flight itinerary.

The telephone call to William Emerson, the Public Policy department head, was the tricky part.“Bill, this is Zachary Severins. I’m at the St. Louis airport, but before I passed through security…Linda Simmons from the Treasury called. We wrote a white paper together for the Institute and the editor there wants us to meet this afternoon to discuss some fine points.

“I told her I didn’t think so, but I’d ask you—on the off chance rearranging my schedule wouldn’t  inconvenience anyone—a long shot, I warned her. Because, Bill, you know how much I want this interview. If tomorrow morning won’t work for you, I’ll call Mark Levine, the editor, and tell him to make whatever changes suit him…

“Ten-thirty tomorrow? You can do that?” Zach asked, keeping his voice slightly tentative. “And the others…last time we spoke my impression was…” He paused, holding the phone down near his leg. What if this switch backfired?

“Oh, thank you.” He stopped and paused again. “Bill, you don’t know how much I appreciate it. The Institute makes a big deal out of everything. But I’d rather deny them than inconvenience anyone at your end…

“Well, if it you’re sure…okay, ten-thirty tomorrow. You don’t know how eager…or no, of course you know how much I want this. It’ll be great to see you, Bill. Really great.”

So far so good—he hoped. Walking the other direction, he telephoned Beth. “The more time they want, the better it looks. I’ll be home Wednesday evening. Thank you, sweetheart. Sorry if I was brusque last night; don’t know what I’d do without you…love you, too. Kiss the kids for me.”

He sank into a chair, so relieved he watched the jets rolling in and out before phoning Susan Cottler, an IBM lobbyist he met at a conference several months ago. They had sneaked off, enjoying two days at the Atlanta Omni suite.

They chatted about how busy they were, (“Grueling, really. The pressure never lets up…”) But they both knew why he was calling.

The Fairmont. Did she prefer a garden or a city view?
(click here for the next episode)
Posted by Unknown at 9:33 AM

Excellent. Adrenalin is rushing. Fiendish Zach the bootlicker! I feel for him, of course. Nicely written - more, more!

Ha -- what a great portrait of an asshole. His wife doesn't know it yet but she's better off without him. Unless of course she hooks up with another asshole...

Thanks Dan and Caren (Eddie's Mom--if that's not your name yet, it will be, congratz again!)